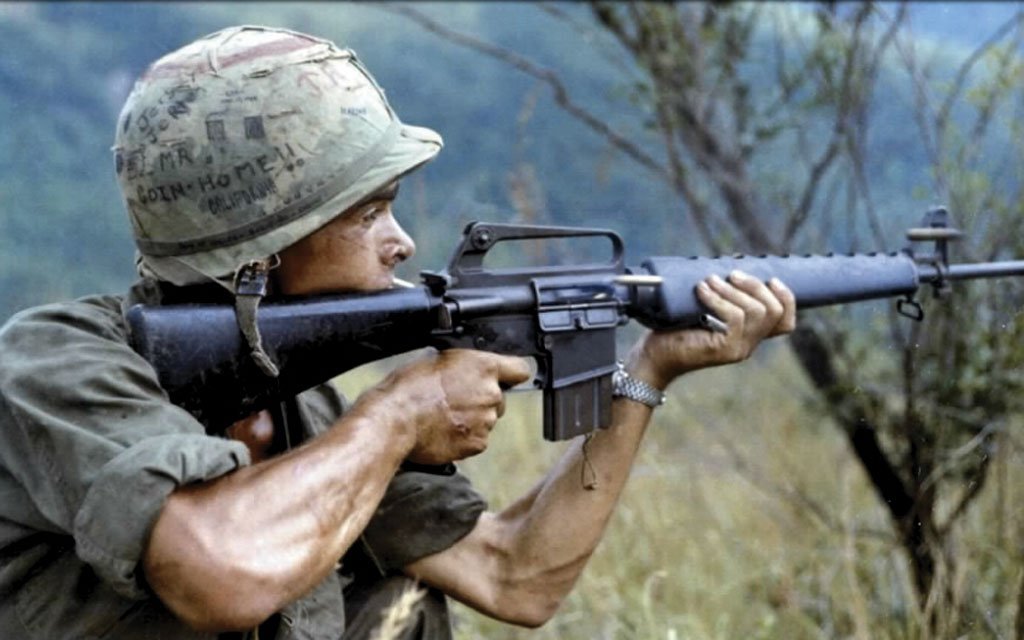 Mark Foster did back at the end of March. He had a series on practical

enhancements for the AR-15 rifle. There is no question the AR platform is quickly

becoming one of the preferred sporting arms of hunters and shooters alike. I

suppose it is the natural progression of things. Riflemen abandoned their single

arena. The AR is now available in a dizzying array of configurations and calibers

single platform and purpose. All of this springs from a rifle that was ahead of its

time when designed a little over 60 years ago in 1956. Like many things, given

enough time, nostalgia seems to get the better of us, and people seem to want

things the way they used to be. This and the rising popularity of Vietnam era

militaria I believe has given birth to what is sometimes called the retro AR. These 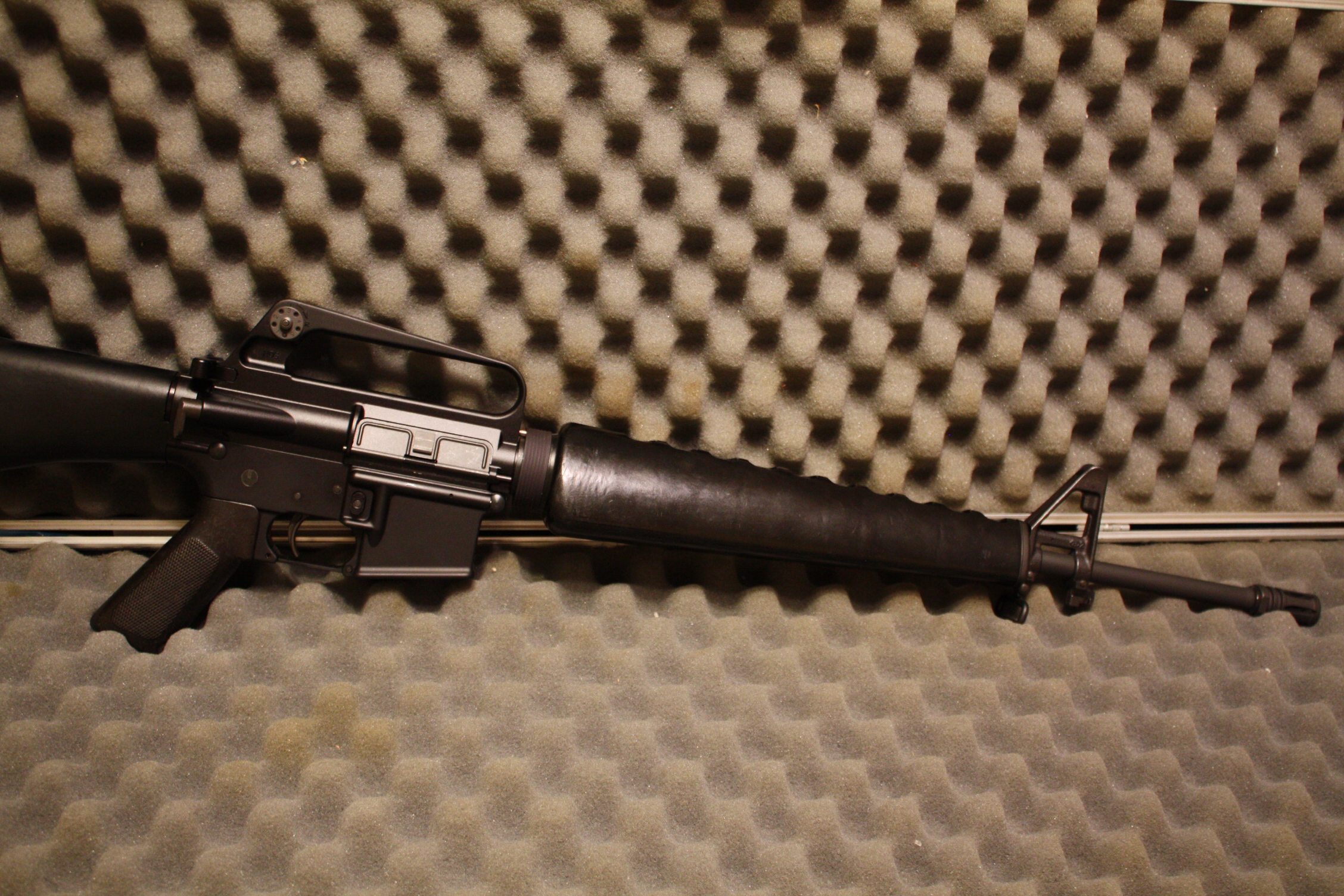 firearm from a parts kit. Eventually I decided I would narrow my field of

numerous choices by building something my father or grandfather carried while

they were in the service. As I figured out what I was willing to spend and what I

more. I narrowed my choices down to building either a semi auto M60 or M1919.

become I ruled it out. The 1919 would also have been an expensive choice

weapon. Shucks! I thought I was going to get to have something cool. Then as I

closed my web browsers depressed about my research my desktop background

breathed new life in my little project. My background is a photo of my dad on the

range with his M16A1, and thus my little odyssey began. 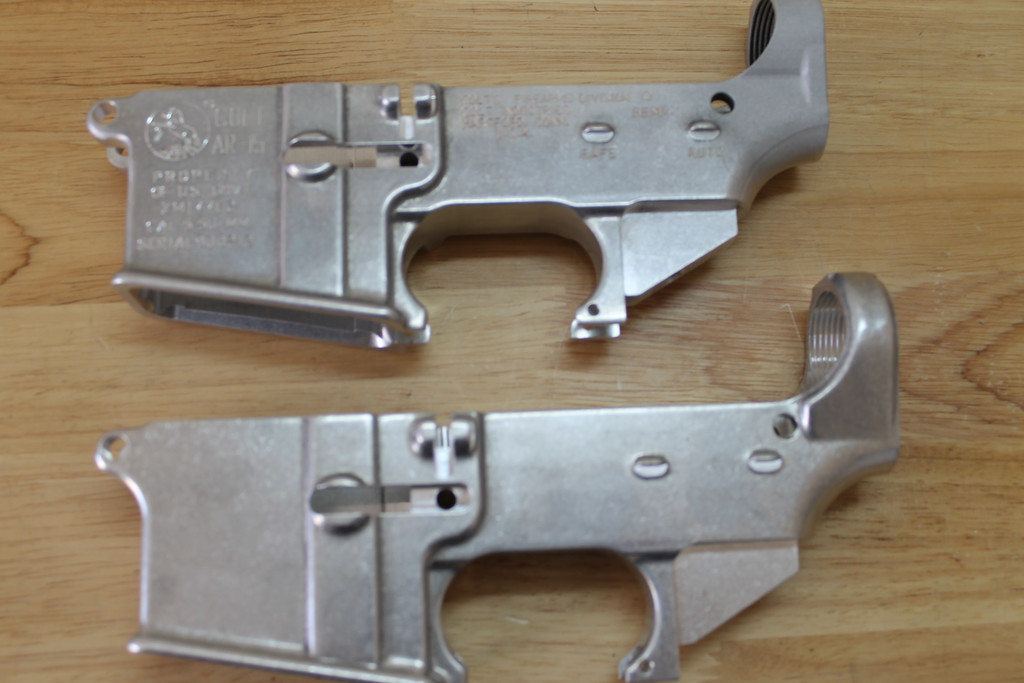 I thought this should be easy enough. I can remember years back M16 parts

kits were easy to find and reasonably priced. I figured just buy a kit and a lower

and slam her together. I was disappointed to find at the time I was looking parts

as I recall. I did more research and found I had a few options for either assembling

carried, such as the Fulton Armory Legacy Rifle. It is meant to be a replica of the

early M16. I compared it to photos I have of my dad, and some of the differences

just did not add up. I recalled my dad talking about the early rifles that were used

carried. I decided I would have to dig more in the minutia of the M16’s history to

determine how best to arrive at an accurate representation of my dad’s rifle. I

parts used throughout the different models of rifles and carbines. I also found two 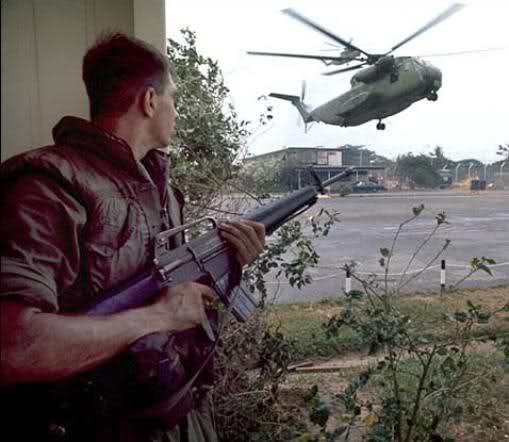 Researching my photos and comparing them to the information on retro

had yet to find an M16A1 parts kit available anywhere at the time. I debated

parts elsewhere. I quickly realized that would get quite expensive. Undaunted I

exactly to replicate my dad’s service rifle. Somehow or another I found TNTE

sales. They specialize in AR uppers and Patrick at TNTE is obsessed with quality

and is a black rifle aficionado.

Spud, barrel is new production, (as well as bolt and charging handle if ordered

with the upper) the remaining parts are period correct USGI parts. Patrick insisted

they only use the best parts they can get. Judging by the upper they sent me I

would have to agree. Not only are the uppers painstakingly correct but the parts

look factory fresh. Everything is exactly as I remember my dad talking about them.

style birdcage. I have to say it was worth every penny I spent and I could not have

than I purchased it from TNTE. This of course given that I could not source an M16

parts kit anywhere at the time I started the project.

Correct rifle and upper all sorted I turned to sourcing my lower receiver,

pistol grip, buttstock, and lower parts. I do not recall exactly where I sourced my

furniture. The only furniture I was missing was the buttstock and pistol grip. The

upper I got from TNTE included the correct triangular handguards. The buttstock

both construction and appearance. The older style components are fiberglass (if

groove. The buttstock differs in length, that is they are 5/8 inch shorter, and the

sling swivel is retained by a roll pin instead of by the buttstock screw. Some early

stocks did not have compartments for the cleaning kits. The particular stock I was

sent does not have a compartment. There was no option for ordering one with or

without. I think TECHNICALLY the M16A1 had the compartment, but sometimes

For the lower receiver, there are actually a few differences between the

early receivers and the current A2 style lower receivers. According to my research

there were actually three different styles of lower receiver on the early M16s.

fence, or the full fence we know today. The dead giveaway however is the

difference in reinforcement profile near the take down pins. The early style lack

profile. Nodak Spud offers all three of the early style lowers. I went with the A1

style lower with full magazine fence. I settled on this after studying my dad’s old

photos and the information available to me through retro black rifle’s website.

parts kit with buffer assembly and put my rifle together. I know I know all the

build. I had no issue getting everything together except I always seem to struggle

room. I had to do a little fitting on the buttstock. The A1 stocks are foam filled and

this foam was causing a fit issue on the buffer tube. I simply inletted things until

the stock slid over the tube properly. I left the buffer extension cap off and got a

the A1 stock is 5/8 inch shorter. At this point I did a standard function test and

then modified the trigger to my liking. I would say to anyone unfamiliar to this

103. I got it just because I was interested in Bob’s lecture on design and function.

and reassembly. And if you want to know how to safely modify your trigger

there’s a DVD for that too. It is DVD 335. I acquired both recently out of sheer

it takes to do the job correctly and safely.

loads and such, but I have not had a chance to dial in my sights and see what my

M16A1 replica will do. I did however have a chance to test fire it. I had to make a

sling a few rounds. I popped in one of those dreaded thirty round magazines and

let fly. The rifle ran flawlessly and the bolt locked open on the last round. I look

forward to getting this rifle dialed in and seeing what it likes to shoot. I am quite

curious as to where its 1:12 barrel will find its bullet weight limit. I am thinking 55

grains will probably be as heavy as she will go. Barrels can sometimes defy the

rules however. My 69grain match load for my 1:9 twist competition AR will

probably be all over the place in this rifle, but the mad scientist in me cannot help

upper provided me by TNTE sales. They have an influx of retro parts right now.

The parts seem to come in waves, so you have to kind of strike while the iron is

hot. They still offer the upper I bought along with simply the barrel this upper

wears. They also offer a barrel kit that contains the correct barrel for the old Colt

XM177 carbine. This is a new offering it was not available at the time I was piecing

my M16A1 replica together. Not only do they have the barrel kit and handguards

but they have correct replica collapsible stocks for the XM177. The XM177 is sort

of the M4 carbine’s grandad. It was used by Special Forces and air assault troops

in Vietnam. I have a few photos of my dad with one. I am agonizing over whether

have. Too many guns so little time and money.

have a representation of an iconic piece of military history. For me however it is

bigger than even that. I hope that it is a fitting tribute to the men who carried one

and served in defense of this great nation. Whether you carried one in the killing

fields of Vietnam, surviving and coming home to people who may have been less

between the end of Vietnam and the adoption of the M16A2. Maybe it was

simply the rifle you trained on for the fight that never came. Whatever your story

this rifle is a tribute to your sacrifice. May she be a quiet reminder of the true

heroes that carried her; the men who never returned home. I deeply appreciate

the service of all of our veterans. I do not mean to simply mention those of a

specific era, but I feel most of our Vietnam veterans have been less than

appreciated especially when they returned home. I think this is quite sad and

shameful. My dad went through basic training sometime in 1977. He served with

he held those that did in high esteem and they were some of his closest friends. In

the absence of my father allow me to say thank you. You men of this era served

this great nation and fulfilled your oath. If no one else has ever thanked you I do.